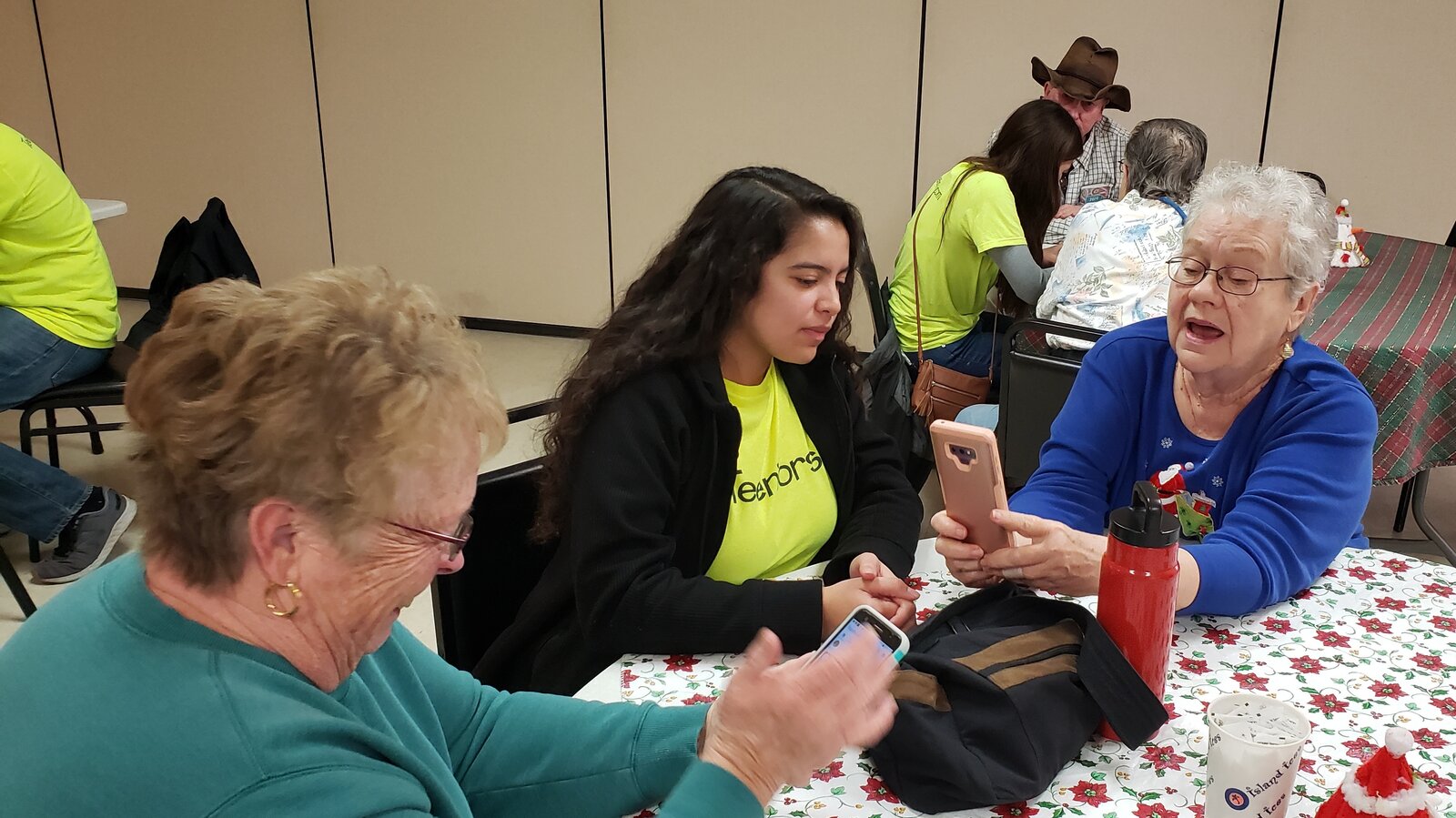 Kendra Gonzales coaches Linda Haverty on how to add a photo of a friend to her contacts list on her phone.

The United States now has 46 million people age 65 or older. That’s a record number, according to a study by the Pew Research Center.

More of these senior citizens are adopting technology, but most also say they need help using new electronic devices such as smart phones. Falling behind on technology puts seniors at risk for social isolation, which makes them vulnerable to poor health and earlier death. It’s also expensive. A study by AARP found isolation is associated with nearly $7 billion in additional annual spending by Medicare.

A startup company in Albuquerque has made matching tech-savvy young people with seniors its mission. Teeniors coaches them on using smartphones, computers and tablets.

Founder Trish Lopez pitched the idea at a startup weekend for women entrepreneurs in 2015 after realizing that her mother needed help.

“She’d lose a password, she’d lose a document and then she didn’t know some simple commands like Control Z that could undo everything she had just done,” Lopez said. “And so she would start all over again.”

As a new mom herself and busy with work, Lopez said she wanted to be able send someone to help her mother.

“But also, I wished I had the patience to help her in the way I wanted to,” she said.

Patience and listening are some of the fundamental skills young people learn as Teeniors, and the program has served more than 3,000 seniors in New Mexico. It added a nonprofit arm in 2018 and has landed grants from Comcast and Facebook to serve those who can’t afford to pay. The mission, Lopez said, is to empower senior citizens.

“I think that’s why we’ve been so successful,” she said. “The inter-generational learning experience is really remarkable and that’s why I always say the main service we provide is not tech support. It is human connection.”

Lopez has seen many Teeniors flourish through those connections. She has also seen many seniors break down when a Teenior helps them understand technology that seemed beyond their comprehension.

That was certainly true for Camilla Dorcey, 76. She was talking to a friend recently in her home in northeast Albuquerque about a new car she was getting that day. But not long ago, that routine task was beyond her, said Dorcey who at one time struggled using her smartphone.

“People would be ringing me and I didn’t know how to answer it,” Dorcey said. “I’d be crying and frustrated and feeling totally useless and old.”

The Pew study found that 4 in 10 seniors own smartphones, but they often lack confidence in learning and using these devices. Dorcey is a retired teacher from Lesotho, Africa, who lived all over the world before moving to Albuquerque with her second husband. When he died suddenly, she was left alone and isolated, too ashamed to admit she didn’t know how to answer her new phone. She tried to get help at stores, but clerks were mystified why she was confused.

Dorcey found a Teenior instead, who helped her download WhatsApp. Now she talks to family and friends regularly in Africa and Europe for free. On the last day of 2019, she greeted friends in England enthusiastically over the app, wishing them a happy new year.

“Oh it’s amazing,” Dorcey said. “I can see them. I can talk to them. It’s really been great. I feel free again.”

Tess Reynolds, 17, is the Teenior who helped Dorcey. Reynolds said she can relate to seniors who may need more time to learn because she has a learning disability and people used to push her to finish her schoolwork more quickly.

“So I know how it feels to be rushed,” Reynolds said. “I want to make sure that doesn’t happen.”

The experience of working for Teeniors has also convinced Reynolds that she wants to become a senior home health aide.

“And this is such a great help to really become what you want to be,” she said.

At a Teeniors event in December at a senior center about 40 minutes south of Albuquerque, 21-year-old Kendra Gonzales was helping Linda Haverty add a photo of a friend to her contacts list.

“I went from a flip top to this. It was like going from a tank to a Ferrari,” said Haverty, who is 81. “And the next time it was Facebook. I’m still struggling with social media. And Kendra’s wonderful.”

Haverty’s family is scattered around the Midwest and she said keeping up on technology is vital to staying connected to them.

“Yesterday I was going through Facebook and found out I have a great-grandson that was born on my birthday…and I didn’t know about it,” she said.

Gonzales has been with Teeniors for four years. It helped her land jobs and decide on a career in public service. She’s working toward a criminal justice degree, and through Teeniors she learned skills such as public speaking and coaching.

“[I learned] things that I don’t think the school system helped me with,” Gonzales said. “This has helped me more, in a great way.”

Trish Lopez never anticipated how Teeniors would affect the young people she employs. It’s not just teaching them tech skills, but also soft skills employers need such as emotional intelligence, problem-solving and communication. Their feedback has surprised her.

“Some of them believe it’s helped them overcome their depression and anxiety and struggles in their personal relationships,” she said. “Just the work of being a Teenior, for the small amount of hours they do it every month, has made an enormous impact on their lives.”

Yannick Hutchinson, 24, just graduated with an architecture degree and said being part of Teeniors will help him learn to communicate better with clients. It also helped when he was struggling with depression.

“It was definitely something that pulled me back from that dark, dark area,” he said. “It was nice, it was a breath of fresh air.”

Lopez had considered dropping him from the coaching pool after he was late several times and that’s when Hutchinson opened up about his struggles.

“We definitely worked it out and I definitely feel I’m more of an asset to this organization now,” he said. “I need to understand I’m being counted on by people and I need to be responsible for that.”

Variations of the Teeniors model exist around the country, according to Generations United, based in Washington, D.C. Executive Director Donna Butts said inter-generational programs offer alternatives to our tendency to segregate people by age.

“We really are much stronger when we’re together and value the wisdom of older adults and the energy and new experience of young people,” she said.

Butts adds that since America’s older generation is disproportionately white compared to the younger population, there are real risks to such segregation.

“And that can be really, really harmful when we have generations that don’t look like each other, they don’t know each other and they don’t understand why they need to invest in each other,” she said.

She said inter-generational programs can overcome those barriers. That was certainly true for Camilla Dorcey.

“I think Teeniors are maybe seeing old people as not totally ready to be put in the grave,” she said. “For me, it’s making me think teenagers should not all be in jail. We’re beginning to see a connection between humans of a different age.”