Diagnosed With Dementia, She Documented Her Wishes. They Said No. 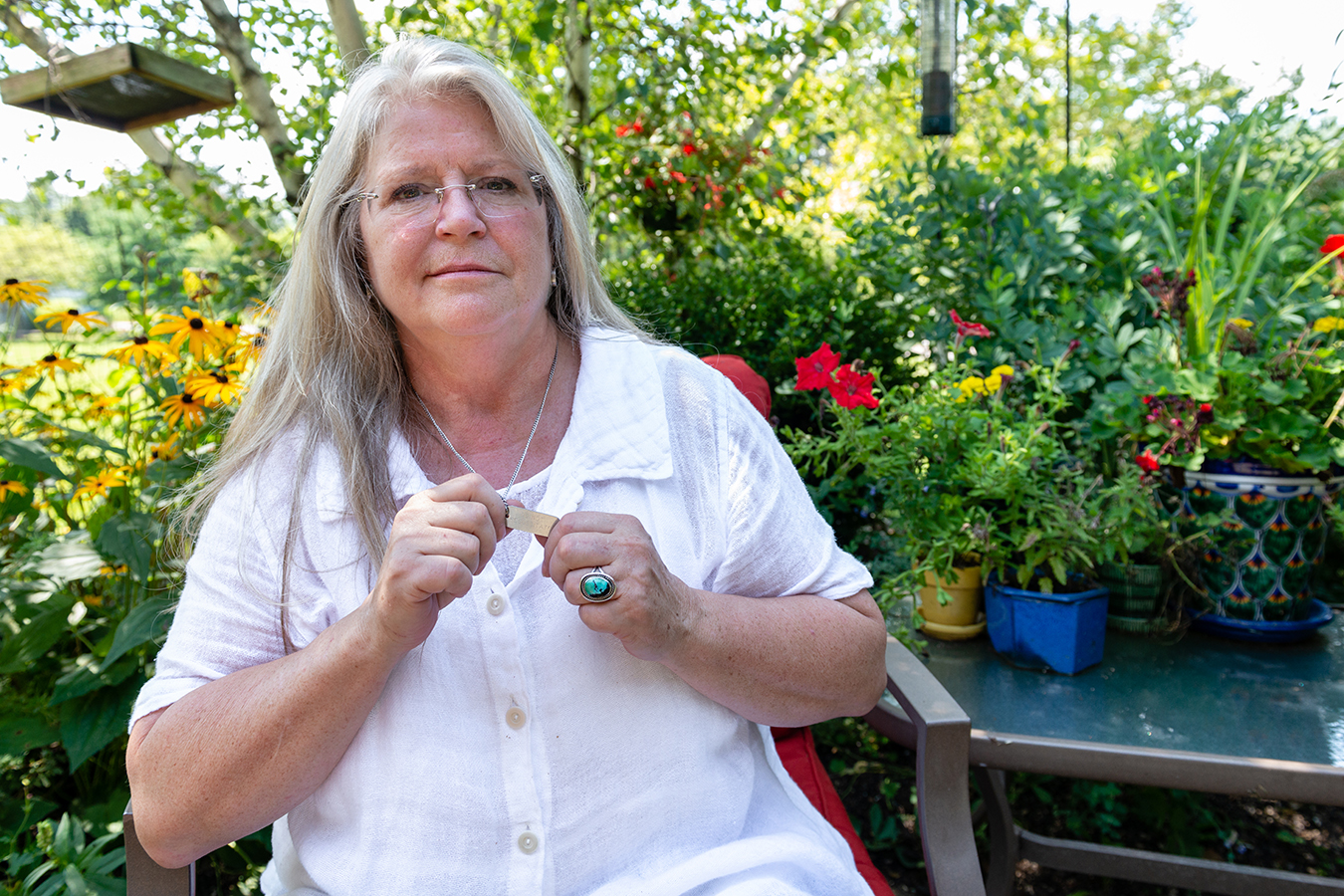 Susan Saran was diagnosed with frontotemporal dementia, a progressive, fatal brain disease. After suffering two brain hemorrhages, Saran signed an advance directive for dementia, a controversial new document that instructs caregivers to withhold hand-feeding and fluids at the end of life. She wears a chain bearing instructions that she not be resuscitated.(HEIDI DE MARCO/KHN)

ITHACA, N.Y. — When she worked on the trading floor of the Chicago Board Options Exchange, long before cellphone calculators, Susan Saran could perform complex math problems in her head. Years later, as one of its top regulators, she was in charge of investigating insider trading deals.

Seven years ago, at age 57, Saran was diagnosed with frontotemporal dementia, a progressive, fatal brain disease. She had started forgetting things, losing focus at the job she’d held for three decades. Then tests revealed the grim diagnosis.

“It was absolutely devastating,” said Saran, 64. “It changed everything. My job ended. I was put out on disability. I was told to establish myself in a community before I was unable to care for myself.”

So Saran uprooted herself. She sold her home in 2015 and found what looked like an ideal place: Kendal at Ithaca, a bucolic retirement community in rural New York whose website promised “comprehensive health care for life.”

And now, she’s fighting with that community over her right to determine how she’ll die ― even though she has made her wishes known in writing. Such a fight could ensnare millions of Americans with dementia in coming years.

In 2018, after two brain hemorrhages, Saran conferred with a lawyer and signed an advance directive for dementia, a controversial new document created by the group End of Life Choices New York that instructs caregivers to withhold hand-feeding and fluids at the end of life to avoid the worst ravages of the disease.

“It’s not something that I am willing to endure,” she said. “I don’t want my life prolonged beyond the point where I’m participating in life.”

But when Saran submitted the document to Kendal at Ithaca, the New York continuing care retirement community where she has spent more than $500,000 to secure her future, officials there said they could not honor her wishes.

In a letter, lawyers told Saran that the center is required by state and federal law to offer regular daily meals, with feeding assistance if necessary.

There’s no provision, the letter said, for “decisions to refuse food and water.”

It’s a cruel quandary for Saran and other Americans who have turned to a crop of dementia directives created in recent years. Even when people document their choices ― while they still have the ability to do so ― there’s no guarantee those instructions will be honored, said Dr. Stanley Terman, a California psychiatrist who advises patients on end-of-life decisions.

“It is, in my opinion, a false sense of security,” Terman said.

That may be especially true for the 2.2 million people who live in long-term care settings in the United States. People with dementia are most likely to die in nursing facilities, according to new research from Duke University and the Veterans Affairs Boston Healthcare System.

“If you’ve got the resources, where you’ve got family and paid caregivers at home, you’re all set,” said Dr. Karl Steinberg, a California geriatrician and hospice physician who has written extensively about dementia directives. If you’re living in a facility, he added, “it’s not going to happen.”

One key question is whether patients with dementia ― or those who fear the disease ― can say in advance that they want oral food and fluids stopped at a certain point, a move that would hasten death through dehydration.

It’s a controversial form of what’s known as VSED ― voluntarily stopping eating and drinking ― a practice among some terminally ill patients who want to end their lives. In those cases, people who still have mental capacity can refuse food and water, resulting in death within about two weeks.

Many states prohibit the withdrawal of assisted feeding, calling it basic “comfort care” that must be offered. Only one state, Nevada, explicitly recognizes an advance directive that calls for stopping eating and drinking. And that’s via a little-known law that took effect in October.

Critics of such documents, however, say they could lead to forced starvation of incapacitated people. The directives may be biased, reflecting a society prejudiced against age, disability and cognitive change, said Dr. James Wright, medical director of three long-term care facilities in Richmond, Va.

He’s the lead author of a recent white paper advising facilities not to honor dementia directives. Based on his years of clinical experience, Wright said many people with dementia become content with their situation, even when they never thought they would be.

“To enforce an advance directive on someone who may have had a complete turnaround on what they think of a life worth living is unethical and immoral,” Wright said.

The dementia directives published in the past few years are aimed at filling what experts say has been a major gap in advance-care planning: the gradual loss of capacity to make decisions about one’s care.

One version, published in 2018 by Dr. Barak Gaster, a professor of medicine at the University of Washington, has been downloaded 130,000 times after it was mentioned in a New York Times story and continues to be retrieved about 500 times per week.

“This is an issue that people have really thought a lot about,” Gaster said. “They worry about it a lot. They’re so eager and excited to have a structured opportunity to make their wishes known.”

Traditional advance directives focus on rare conditions, such as a persistent vegetative state or permanent coma, Gaster said. “And yet the No. 1 reason a person would lose ability is dementia,” he added.

In addition to Gaster’s document, directives drafted in New York and Washington state have drawn hundreds of users. The aid-in-dying advocacy group Compassion & Choices released a dementia directive this month.

As the U.S. population ages, more people ― and their families ― are grappling with dementia. By 2050, nearly 14 million Americans aged 65 and older may be diagnosed with Alzheimer’s disease.

“We are right now experiencing the very first upswing of the giant wave of dementia that’s heading our way,” Gaster said. 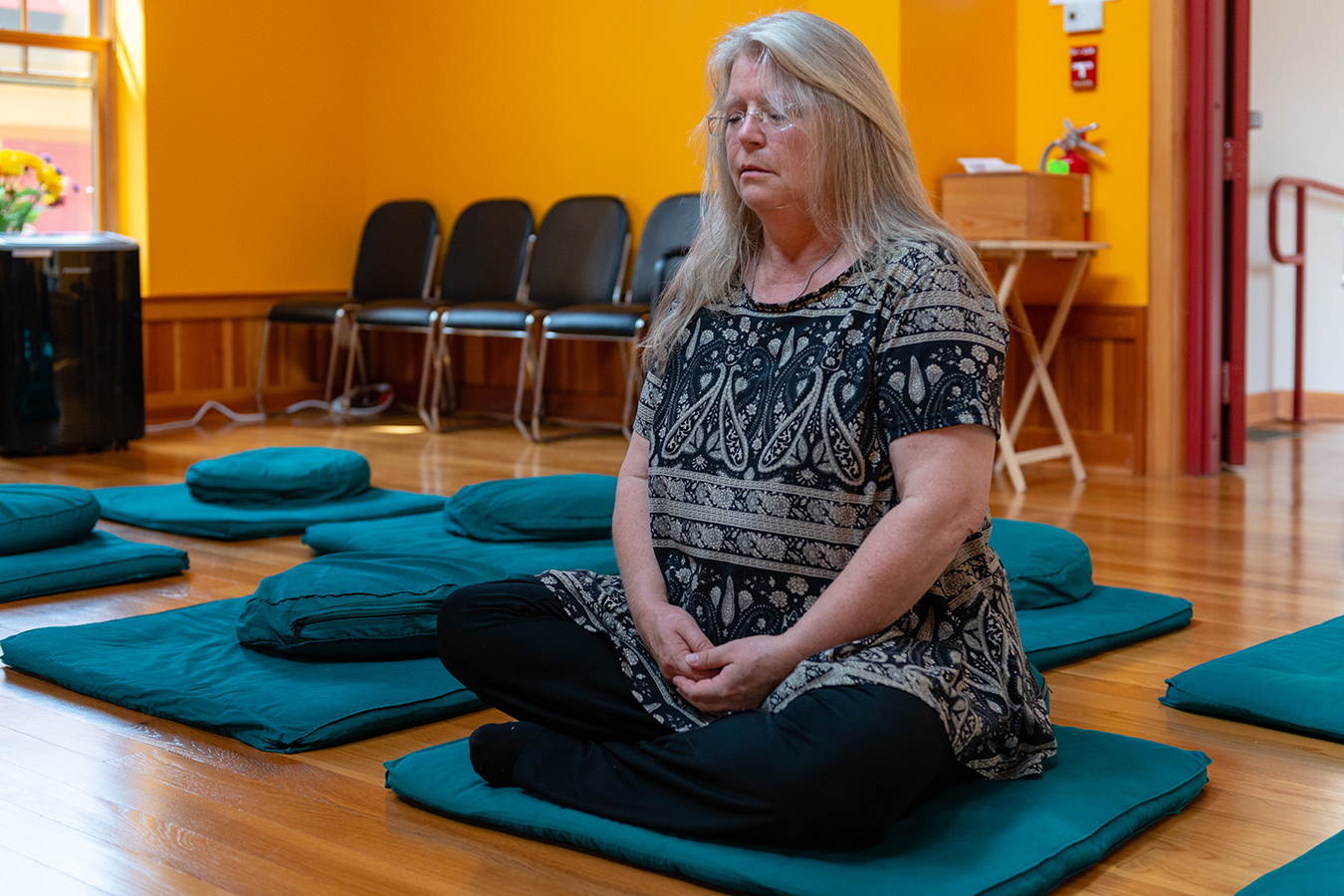 Saran, a longtime Buddhist, often drives to a nearby monastery to practice her faith.(HEIDI DE MARCO/KHN)

Saran is on the crest of that wave. Divorced, with no close family, she turned to Kendal ― with its 236 independent units and 84-bed health center ― as her final home. During her four years there, she has noticed some decline in her mental clarity.

“Even some of the simplest mathematical problems, like even seven times seven, I can’t think of it now,” Saran said.

Still, she is able to manage her affairs. She cooks her own food and cares for her three cats ― Squeaky, Sweetie and Pirate, a one-eyed tabby. A longtime Buddhist, she often drives to a nearby monastery to practice her faith.

In late summer, Saran invited visitors to her small cottage at Kendal, where tapestries hang on the walls and bookshelves are filled with tomes on religion, death and dying.

Frontotemporal dementia affects about 60,000 people in the U.S., and patients often die within seven to 13 years, but Saran’s disease appears to be progressing more slowly than expected.

“I think I have great capacity,” said Saran, who wears her silver hair long and favors jeans, linen shirts and turquoise jewelry.

She chain-smokes, lighting up the Seneca cigarettes she buys for $3 a pack from a nearby Indian reservation. She thought about quitting but decided it wasn’t worth the effort and continues to indulge her habit. “If you had my diagnosis, wouldn’t you?” she said.

When Saran was hospitalized after her strokes, she suddenly understood what losing her abilities might mean.

“I realized, oh, my God, I might get stuck in a situation where I can’t take any independent action,” she recalled. “I better make sure I have all my paperwork in order.”

She was stunned to learn it might not matter, even after her local lawyer, Chuck Guttman, drafted health care proxy documents and a power of attorney. 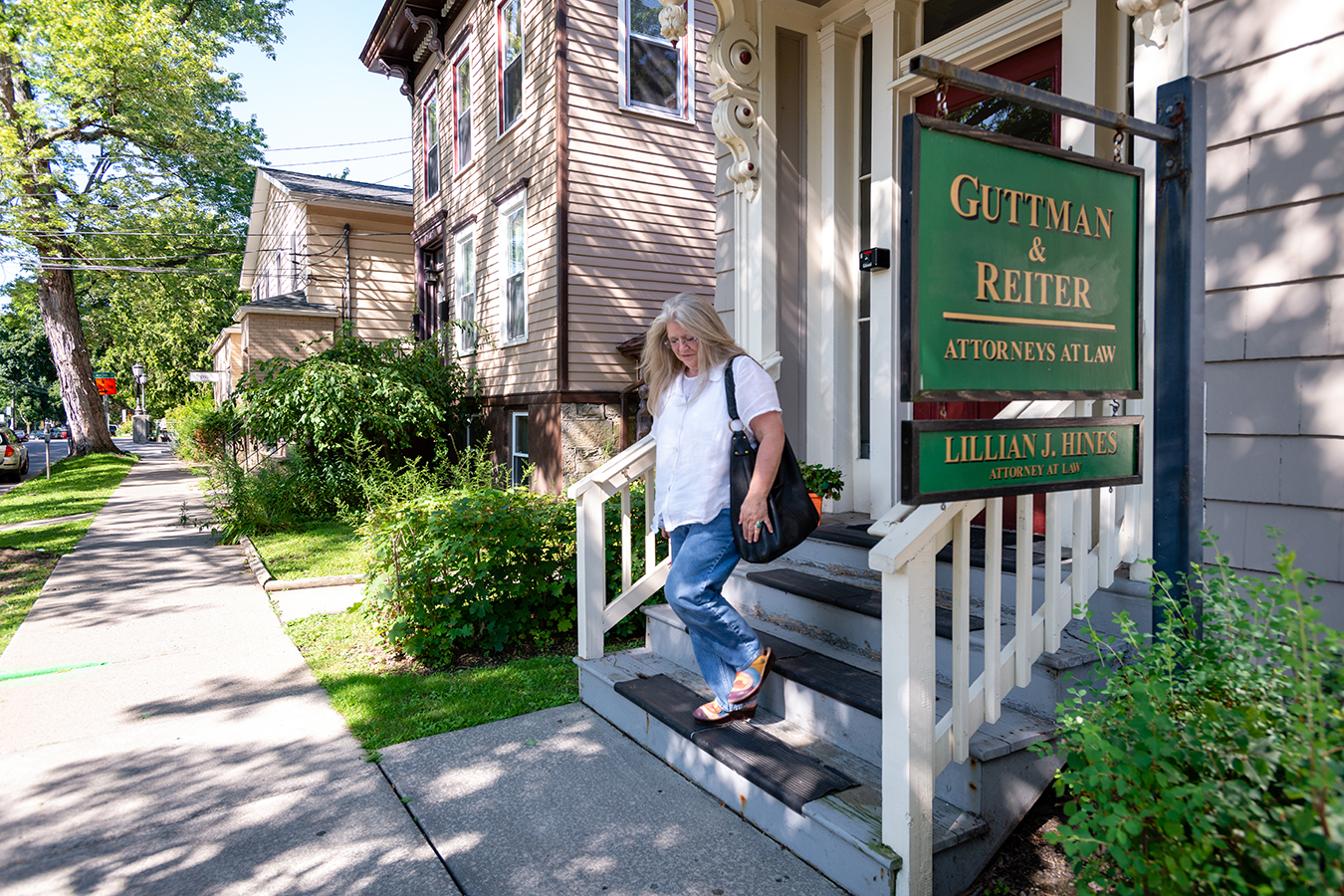 Saran asked her lawyer, Chuck Guttman, to draft health care proxy and power of attorney documents as part of her advance directive to ensure that her final wishes are carried out. The new crop of dementia directives was inspired, in part, by high-profile cases of dementia patients spoon-fed against their apparent wishes.(HEIDI DE MARCO/KHN)

Laurie Mante, Kendal’s executive director, declined to comment on Saran’s situation, even when Saran authorized her to do so.

“We recognize the great complexity in balancing our residents’ wishes with what is required of us,” Mante wrote in an email. “We have a dedicated team who works to balance those interests, and, when appropriate, work with our residents and their families to seek alternative paths.”

Saran said no one from Kendal has reached out to discuss an “alternative path.”

Not all dementia directives include instructions about assisted feeding. Gaster said he and his colleagues had “heated conversations” before deciding to leave that issue off their popular document.

Instead, he said, his option helps more people by addressing general goals of care for each stage of the disease. The most important thing, he said, is for people to consider their choices and share their desires with their loved ones.

The debate, Gaster said, boils down to whether assisted feeding is “basic support” or “a medical intervention that can be declined in advance.”

“There’s still a very wide perspective of viewpoints on that,” he said.

Backed by statute and practice, facilities say they are bound to offer food to all residents willing to eat, and to assist with hand-feeding and fluids if a person needs help.

The controversy centers on the definition of those terms.

Wright says late-stage dementia patients who show any interest in food ― a flick of the eyes, grunting or gestures, opening the mouth ― should be fed until they refuse it. Steinberg and others contend the default should be “don’t feed unless they ask for it.”

It’s always going to be “somewhat of a guess,” Wright acknowledged, about whether hand-feeding someone is help ― or force.

“I’ve not seen any guidelines that can faithfully give good, unbiased guidance,” he said. “I feel that I personally can determine when food means something to my patients and when it doesn’t.”

The new crop of dementia directives was inspired, in part, by high-profile cases of dementia patients who were spoon-fed against their apparent wishes. In Oregon and  British Columbia, courts ruled that food and water were basic care that could not be withdrawn.

But so far, there’s been no court case that says a clear advance directive for VSED “may or must be honored,” said Thaddeus Mason Pope, a professor at the Mitchell Hamline School of Law who studies end-of-life decisions.

Pope said he has heard of many people who move out ― or their families move them out ― of long-term care facilities to avoid assisted feeding in the last stages of dementia.

Saran has considered that, too.

“I should probably just leave,” she said, although that would mean losing the nonrefundable investment she’s already made. “I think about that every day.”

But then what? Hospice might be a solution, but only if there’s room when she needs it, she said.

Saran said her situation should be viewed as a cautionary tale. She wishes she’d asked more questions, insisted on answers about exactly how she would die once her dementia progressed.

“I didn’t realize I was signing away my right to self-determination,” she said. “I am appalled that my future demented self takes precedence over my competent current self.”